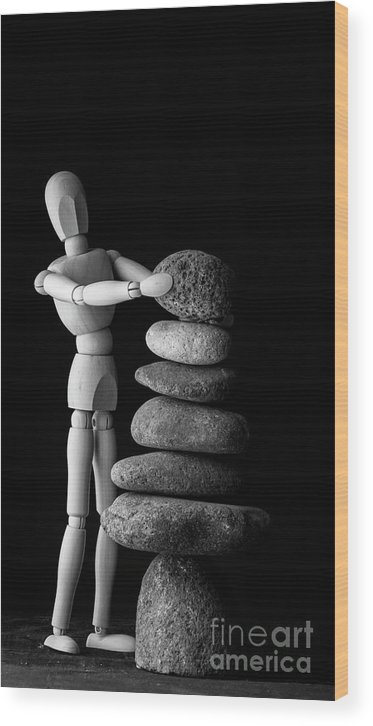 The watermark in the lower right corner of the image will not appear on the final print.

The Triumph of Sisyphus Wood Print

The Triumph of Sisyphus wood print by Holly Ross.   Bring your artwork to life with the texture and added depth of a wood print. Your image gets printed directly onto a sheet of 3/4" thick maple wood. There are D-clips on the back of the print for mounting it to your wall using mounting hooks and nails (included).

Sisyphus faced punishment by the Greek gods and was forced to push a stone uphill for all of eternity, but he has finally triumphed! Imagine his... more

Sisyphus faced punishment by the Greek gods and was forced to push a stone uphill for all of eternity, but he has finally triumphed! Imagine his relief! Albert Camus, in The Stranger, said "“I leave Sisyphus at the foot of the mountain! One always finds one's burden again. But Sisyphus teaches the higher fidelity that negates the gods and raises rocks. He too concludes that all is well. This universe henceforth without a master seems to him neither sterile nor futile. Each atom of that stone, each mineral flake of that night filled mountain, in itself forms a world. The struggle itself toward the heights is enough to fill a man's heart. One must imagine Sisyphus happy” Here my Sisyphus has reached the triumphant peak, finally placing the stone firmly atop the mountain. (c) Holly Ross Photography, LLC 2020