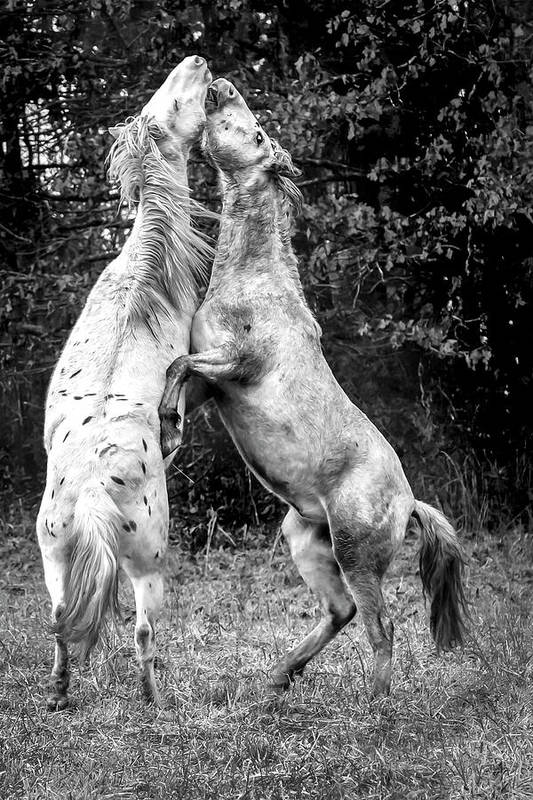 Horsepower art print by Holly Ross.   Our art prints are produced on acid-free papers using archival inks to guarantee that they last a lifetime without fading or loss of color. All art prints include a 1" white border around the image to allow for future framing and matting, if desired.

The feral/wild horses of Shannon County, Missouri have captured the hearts of locals for almost a hundred years. Thought to be the descendants of... more

Congratulations on your feature in the Year of the Horse

Congrats Holly, on your beautiful feature in the group: New FAA Uploads! f/v

Congratulations, your artwork has been chosen for special feature gallery in Kingdom Animalia, you welcome to add your work there under discussion tab ! l/f/p

Congratulations! Your outstanding artwork has been chosen as a FEATURE in the “The Gray Scale Outdoors” group on Fine Art America — You are invited to post your featured image to the featured image discussion thread as a permanent place to continue to get exposure even after the image is no longer on the Home Page.

Congratulations on your feature in the Fine Art America Group "Images That Excite You!"

The feral/wild horses of Shannon County, Missouri have captured the hearts of locals for almost a hundred years. Thought to be the descendants of horses turned out during the Great Depression, these horses have created strong family bands named for their geographic region: the Shawnee, the Broadfoot, the Rocky Creek, and the Round Springs herds. These two colts are from the Shawnee herd. The one with the spotted behind was born in 2017 - I have photos of him as a young guy in September of that year - and the other is probably just a couple of months younger. On this day, in December 2018, these two were being their normally playful selves, and enjoying being young. As the snow began to fly that day, their play increased even more. It was my first time seeing them exhibit this behavior and it was like watching your own kids pass a milestone in life. (c) Holly Ross Photography